Aluminium's ability to form any shape and its protective qualities have made it the most versatile packaging material in the world. In addition, a key benefit is that aluminium foil, aluminium cans and other aluminium packaging materials can be fully recycled and reused an infinite number of times. 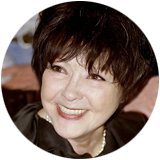 Aluminium foil
Thin but strong, eye-catching because of its silvery glitter, aluminium foil is an everyday presence in our lives. Its unique insulating properties make aluminium foil ideal packaging for just about anything.

Aluminium foil is nothing more than aluminium alloy sheets that are between 0.004 and 0.24 mm thick. Aluminium foil is 8 times thinner than a banknote and yet it provides perfect protection against light, liquid and bacteria. It is thanks to these properties the shelf life for many type of groceries packaged in materials that include aluminium foil often exceeds 12 months.

Packing made from aluminium foil is most widely used in the food industry. Many groceries are easily affected by sunlight, which damages their appearance and worsens their taste. Foil solves this problem in the best way possible which is why it is generally regarded as the ideal core packaging material for dairy products, pastries, and beverages. For example, dry milk in hermetically sealed packages made from laminated foil has a shelf life of 2 years.

Aluminium foil is non-toxic, so it does not damage the foods wrapped in it, but instead protects them. Aluminium foil is used in food containers, bins, bottle caps, soft packages for liquids or bulk food stuffs and many other types of containers.

Aluminium foil was first produced in Switzerland in 1910 following the development of continuous aluminium rolling technology
Foil protects foods against sunlight exposure which can cause them to go bad. Foil does not melt from high temperature, nor does it lose its shape or impart any bad smell to the food wrapped in it. This means foil can be used for grilling food or even for cooking on an open fire.

For example, laminated foil with paper stuck on the inside is used for packaging tea and sweets. This kind of foil is three times as waterproof as standard foil even in hot climates: the paper absorbs moisture while the foil itself protects the contents against other negative elements.

Foil with water and grease proof paper on one side is used in the packaging of butter, cheese, ice cream and other dairy products. 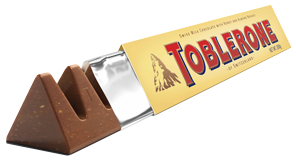 At home, people also prefer to store food in aluminium foil, especially cheese. Even in a fridge cheese easily absorbs foreign odours which can alter its taste. Foil solves this problem completely. It also worth noting that the best way to bake is to wrap the produce in aluminium foil first. If the foil used in the process has enough strength it can significantly protects the pans or trays. Strong enough foil can easily withstand the weight of the food you are baking.

Nespresso
Coffee in aluminium capsules was first conceived by Eric Favre, a Nestle employee, in 1976. Unlike coffee in traditional bags which lose their aroma after the bag is opened, single serving coffee capsules are only opened immediately before use which means that this is not a problem. 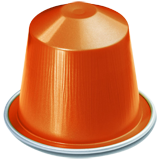 In addition to its great shielding properties, another benefit of aluminium foil as a packaging material has to do with the savings that can be achieved in transporting goods. Thus when Kraft Foods replaced glass bottles with doy-packs from foil film, the amount of beverages they could transport in a single vehicle doubled because doy-packs weigh only 6.1% of the weight of the beverages themselves.

Medicines are another important product that aluminium foil is used to package. Once manufactured, medications must be protected from the elements over an extended period of time, often for years as exposure can alter their properties. Aluminium foil is used in the packaging of all types of medications such as pills, capsules, creams, lotions, liquid and powder medications. Aluminium foil offers 100% protection against light, moisture, oxygen and other gases as well as against microorganisms and bacteria.

Did you know that wine makers, who tend to be fairly conservative, are increasingly using aluminium stoppers in their bottles. The British started using aluminium stoppers in their whisky bottles as far back as 1926, but for a long time the wine industry didn't buy into the idea. Later on, tests were carried out that found that in every 20th bottle the classical cork damages the wine bouquet. By contrast, an aluminium top cuts off the oxygen flow and is just as good at 'ageing' the wine as a traditional cork. 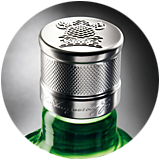 Tanqueray No. Ten gin stopper made from 8011 aluminium alloy
Aluminium cans
Aluminium cans are the most environmentally friendly and most recyclable type of container in the world. Aluminium cans allow the beverages inside them to retain their taste, while protecting them from the negative impact of the elements. In addition, the can itself does not get rusty or lose its properties in any other way. More than half of the aluminium in existence today will be recycled. In some countries the share of aluminium cans in circulation is much greater than in others, for example in Germany 95% of all beverages are contained in aluminium cans.

On average, it takes just 60 days to manufacture one aluminium can, fill it up with a beverage, deliver it to a store, sell it to a customer, recycle it and make a new can from it. This is a process which can be repeated ad infinitum.

An aluminium can is more expensive to produce than a glass bottle but its use in production is 3.5% cheaper than using a glass bottle. For example, aluminium cans deliver significant savings when beverages have to be transported over long distances because they're lighter than bottles and they don't break. Modern 0.33 litre beverage cans weigh about 25 grams and their walls are no more than 0.08 mm thick. 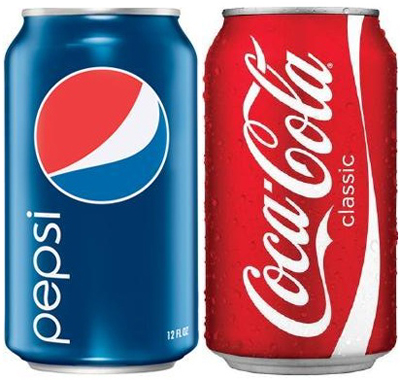 Coca-Cola and Pepsi started to use aluminium cans in 1967
Beverages in aluminium cans retain their taste after production and offer 100% protection against the elements such as oxygen, light, moisture, and other elements.

Originally aluminium cans were fitted with special rings that you had to pull on to open. The entire top of the can would peel back. The ring we have today that remains on the can was only invented in 1975.

So how are aluminium cans produced? They're made from aluminium alloy that is 1% magnesium, 1% manganese, 0.4% iron, 0.2% silicon and 0.15% copper.
First a press is used to punch pieces out of an aluminium sheet. The press also punches discs about 14 cm in diameter from the sheet and bends its edges to make it into a kind of cup. These edges are then pulled out under high pressure to make the body of the can. The cans are then lowered into 60C hydrochloric acid and then placed into water. The acid removes a thin layer of metal from the surface of the can that gives it its trademark glitter. A thin layer of lacquer coating is then applied to the bottom of the can to make sure it can easily slide across a conveyor belt and in vending machines.

Then a picture is painted on the can and lacquer a coating applied. The can is also lacquered on the inside with a special water based safe lacquer.

Finally, the neck of the can, which is approximately 5 cm wide, is made.. At this stage the aluminium is paper thin. The tops are made separately and welded to the neck after the can has been filled with a beverage.
Different size aluminium cans are regarded as standard in different countries 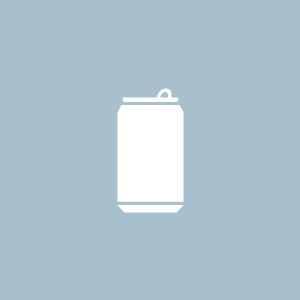 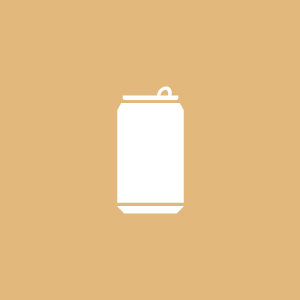 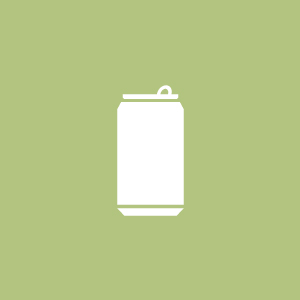 Australia
Modern manufacturers are constantly working to improve the design of the aluminium can. For example, a new design with a double-layer wall has been developed: before consumption the external layer is removed, which makes the can hygienic. There are cans that can be closed after opening allowing for only a portion of the beverage to be drunk with rest being stored for future use.

The Japanese are working on aluminium bottles with screw-on tops. This allows beverage containers to look like regular bottles or other traditional containers. Depending on the colour they're painted in, they can look like porcelain, clay or tinted glass. Smart cans have already been developed whose walls contain an aluminium layer and a synthetic layer with special chemicals in between. When you squeeze a can like that, it causes an endothermic or exothermic reaction which results in the contents heating up or cooling down.

Global aluminium can production capacity exceeds 250 billion cans per year. 40% of this capacity is in the US, Japan is in second place followed by Brazil and China.

More than half of aluminium cans around the world get recycled. To put that into context every minute more than 113,000 cans are being recycled in the world. It has been estimated that recycling a single aluminium container can save enough energy to keep a 100-Watt lamp on for almost four hours. As a result, the energy saved each year by recycling aluminium cans is equivalent to 20 million barrels of oil or 12 billion kWh of electricity.
Photos from © Shutterstock and © Rusal are used in this article
Read also
Aluminium in other applications
Transport
Construction
Consumer goods
Electrical engineering